As the movers and shakers of Ibiza’s cocktail world gather at El Hotel to invent new concoctions or deliver unique twists on originals, Michelle Robertson and Nic Jauncey take one for the Essentialibiza team and volunteer to go along and taste as many cocktails as they can physically consume. You’ve got to love their dedication… 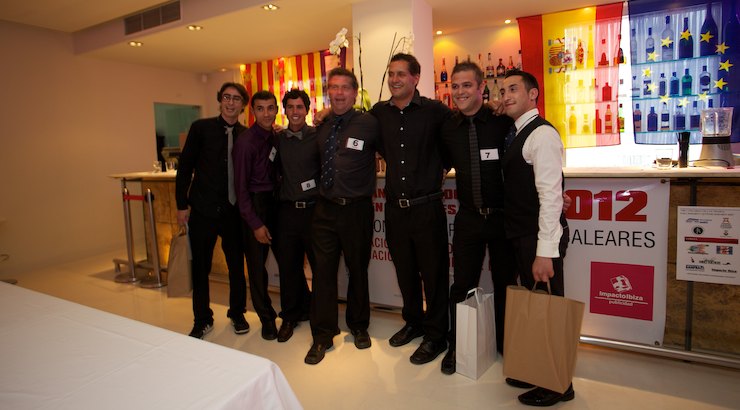 Imagine sunning yourself on a beautiful sandy beach while lapping up the blue skies around you – and the only thing that’s missing is something wet and delicious. Like a drop of coconut water in the desert, a cool, refreshing, fruity sensation packed with a punch is an absolute necessity when you’re in need of a little hydration to assist your sunbathing session. So we were delighted to find out this week that Ibiza’s bartenders have been pulling out the stops in search of the perfect cocktail for a long, hot summer, resulting in a rather tasty competition at Pacha’s El Hotel.

The results of the VIII Torneo de Coctelería de la Asociación de Barmen de Baleares en Ibiza y Formentera, that is, the 8th cocktail tournament of the association of barmen in Ibiza and Formentera, saw a line-up of creative concoctions that the Essential team were only too happy to try out. There are three categories: young bartenders, under 27 and bartenders, and in three separate sittings, the competitors in each category shook, strained and stirred their way under the eye of some professional judges, as they put together the cocktails that they had invented especially.

Once the assembled guests and judges had gotten to the bottom of all the glasses, the overall winner was announced – Guillem Martinez Marti, 27, from Barcelona who now works with Ibiza Bartenders as an instructor of cocktail training courses, but previously mixed at Amante, and Stain in Santa Eularia. Guillem entered the competition for the first time this year and his creation entitled ‘Bittersweet’ – consisting of passion fruit, orange juice, kiwi, Bitter Kas and vodka. Although it was packed more full of vitamins than alcohol, the tropical taste triumphed as a drink to be enjoyed by everybody because you can enjoy the same cocktail without adding the alcohol.

He will now compete in the next round of the tournament in Mallorca, along with the winner in the young bartender category, Carlos Martinez Roig, who works in Nanking, Ibiza. After the tournament it was revealed that the guys at El Hotel were so impressed with Carlos’ spearmint style mojito, it looks like he might be showing his shaker skills at Lio this summer.

The other competitors that just missed out on the grand titles were Marcelo Bekerman from Argentina and Diego Pereira from Uruguay. Marcelo, who works in the Palladium Hotel, Santa Eularia, decided to fuse his cocktail with the taste of Ibiza and his ‘Fresa del Mar Ibicenca’ was a berry blast of Ibicencan herb, ginger, cream of raspberry, Martini blanco and strawberry puree. Former winner Diego went for something a little darker with his ‘Galera’ – a mix of Southern Comfort, Chambord raspberry liqueur, ginger ale, lime and passion fruit.

As the bartenders put away their blenders for the day, original founder of this competition in 2004 and owner of Ibiza Bartenders, Pablo Ayos, along with winner Guillem told us that while bartenders on the island are more and more keen to develop their skills – and of course their range of cocktails – not nearly enough of them are being given the chance to shine. So, the next time we hit the beach and are in need of something to awaken our senses, should we give the friendly barman the chance to let us experience something wild and wonderful? Absolutely, says Pablo, adding with a touch of garnish, “and you might even get a great cocktail too”.