When you think of a day at the office, for most people, it involves an early rise, a busy commute and eight hours at your desk more often than not staring at your computer screen. For Jon Sa Trinxa the only thing he has in common with that scenario is the length of time he spends in his ‘office’, as for the rest, he enjoys a leisurely commute to work where the first thing he does is go for a swim. He then retires to his custom built shed in the corner of Sa Trinxa on Salinas and plays an eclectic set for eight hours, with a perfect view of the stunning beach and blue sea beyond it.

He once told me when I interviewed him a few years ago that his first visit to the island was with a group of friends in the ‘80’s who drove a camper van across and when he missed his lift home he decided just to stay on the island and he’s been here ever since. Whether that is completely accurate or just a good story, there’s one thing for certain, when you mention Salinas beach to anyone anywhere in the world that has been to Ibiza they’re going to have a story of the day they lay in front of Sa Trinxa and listened to this cool DJ play some of the finest tunes that they had ever heard!

Essentialibiza popped into ‘the shed’ to catch up with Jon on the understanding that if we interview him and take his picture we had in turn to sit for him while he took ours. A photographer in a previous life, Jon has taken to snapping anyone that wants to take his picture, we’re guessing he might have a few albums worth by now!

How would you describe a typical day on the beach for you?

It’s always changing; I’m really surprised we still get away with it so I’m always playing like it’s the last day. I always start with a swim and as the season progresses I get a little bit fitter and I can swim out to the boats and ease myself into the day. I play for eight hours each day and I try and not play the same set two days running. The first year I was here I played every day, now I take a few days off. I never actually saw the island for the first five or six years because I was always playing here. 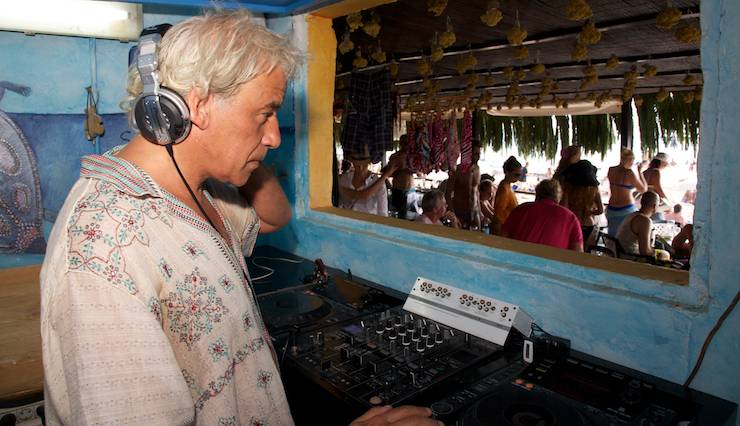 Playing for that length of time everyday and keeping it fresh must result in a huge record collection?

Yes, and also playing completely new stuff every year, it’s constantly evolving but I suppose you’ve got to keep that enthusiasm to be a DJ. I’m a music lover first then a DJ and keep my fingers crossed that I have accumulated all the music that I need by the beginning of each season. Sometimes I get to the start of the season and see me questioning whether I have enough music to get to the end. I still buy a lot of vinyl, I love to collect music and I’m still transferring a lot of my record collection from vinyl, it’s an endless recycling.

What’s the craziest thing you’ve seen on the beach?

Ah, that’s like saying what’s your favourite record. I’ve seen a lot of crazy things on this beach. I had to do my top ten for a radio show and I had no idea where to start. Sometimes people will come and ask me what the last track I played was and I have no idea.

You’ve been on Salinas since ’94, how has the beach changed since then?

When I first came here there were less people and the people who did come down, came down everyday. It was smaller and almost everybody knew each other. More or less everybody was naked also. I had to keep my eyes on the horizon or else I would have been thoroughly disrupted, which is why I can’t tell you the craziest thing that ever happened because I probably missed it. 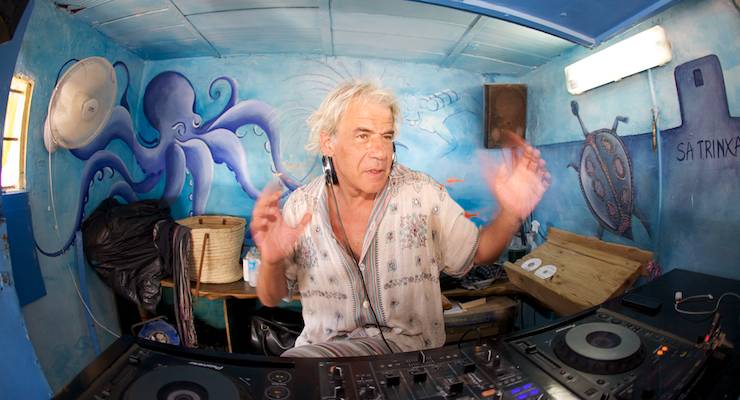 What are your thoughts on the VIP beach clubs with luxury beds and bottle service?

If they donate as much money to charity as they spend in these VIP beach bars I don’t have a problem with them otherwise it’s rather vulgar. That’s not really my kind of thing. Ibiza for me was always more about being incognito, there was always wealthy people that came here but you wouldn’t particularly know who they were, that was the cool vibe about it. The hippie that you had being talking to on the beach was the guy that owned the huge yacht around the corner. I was a bit surprised by them but if I was 18 or 19 and this was my first time in Ibiza I’m sure I might think it was great so you also have to look at it from that perspective.

Do you live in Ibiza all year round?

No, if I stayed here in the winter I think I’d go nuts, some people say I am already! I love living here part of the time and I love travelling. I play in Bali quite a lot and South America also in Columbia, Peru. Venezuela and Brazil. I’ve also played in Australia a lot.