There are times when Ibiza really lives up to its reputation as an island of contrasts. This weekend has been one of those occasions. While Amnesia partied on until lunchtime, Space opened its doors for the final time of the season and Blue Marlin Ibiza shook its last summer cocktail, an altogether more different event was taking place in the centre of the island. The Ibiza Spirit Festival was not a closing party, but an event aimed at opening minds. It was to be a day of “joyous celebration that shows us how beautiful life can be… how together we can generate the energy for positive transformation.” We’d enjoy music, dance, food, yoga, singing, meditation, art, childrens events and a bewildering array of therapies, all in the incomparably beautiful gardens of Agroturismo Atzaró. What an antidote to the frenetic closing parties. 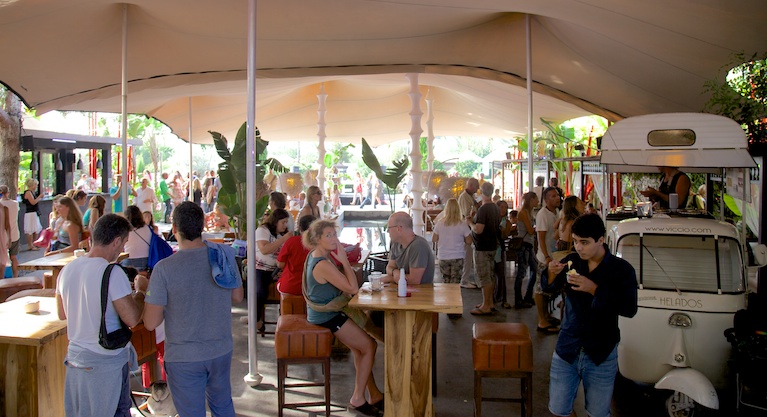 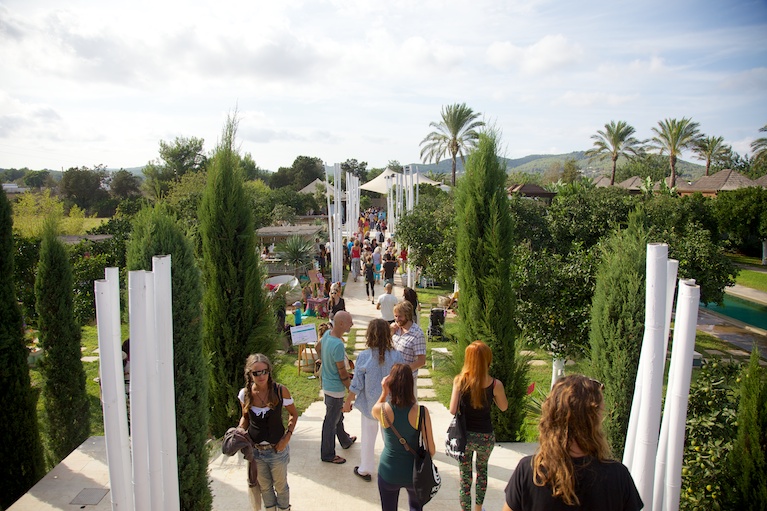 The only possible fly in the ointment was the weather. It had been dry for days following the torrential rain that drenched the island at the end of September, but as we prepared to drive the short distance to Atzaró there was an ominous clap of thunder, the sort that shakes a house to its foundations. We waited at the door. Rain began to fall. Then, instead of the threatened deluge, it stopped. Whatever they were doing at Atzaró must have worked. Somebody up there had listened and switched off the taps. So, slightly delayed, we headed off. But we were later to regret that holdup. This was only the second ever Ibiza Spirit Festival. Last year’s was held in the relatively compact surroundings of the Casita Verde ecological centre. So we were expecting something fairly low key. We knew we were wrong as soon as we got close to Atzaró. The fields around were already filled with cars with a stream of people heading towards the entrance. This was obviously a far bigger event than we’d been expecting. When we got there we could see the festival seemed to have taken over every corner of Atzaró’s vast grounds. And everywhere was busy. The threat of rain clearly hadn’t put anybody off.

Our plan had always been to try out some of the natural therapies on offer. But before we get chance the blinding pink of “Susu’s Lucid Light Dream Machine” catches our eye. Actually, you can’t miss it. And, I must admit, I can be sucker for technology and that’s what the light machine is. So I put on the pink headphones, the special glasses and followed the instructions to lie back on the soft bed and close my eyes. Vaguely Indian music played over an almost imperceptible beat fills my ears and in front of my eyes there’s a constantly moving kaleidoscopic coloured pattern. It’s a spectacular 10 minutes. Who needs Space closing? It was after the Susu experience that we discovered the perils of arriving that little bit late. The Festival kicked off at 11am, we got there just after 2pm and by the time we got to the therapy room everybody was booked up for the rest of the day. So we missed out on massage, reflexology, reconnective healing, reiki, cranio-sacral, crystal healing and all the other therapies on offer. The same happened when we went to consult the oracles offering tarot, medicine wheel, psychometry and other ways to guide you along your life path. All their slots were taken. So our plans for individual treatments would have to wait, but it wasn’t really a hardship. There was so much to see and do at the festival. 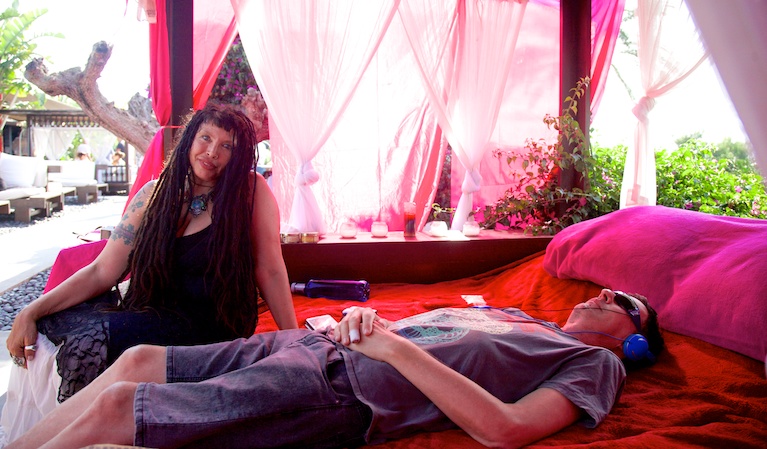 Walking from the entrance past constant inspirational word-signs planted in the grass or hanging from trees we came first to the children’s area. Kids were enthusiastically involved in yoga, face painting, puppet shows, multiple arts and crafts, listening to storytellers or playing organised games. They even had their own healing tent. Next we came to a tent filled with spiritual paintings and mandalas. Beyond that was the food court with meals, drinks and snacks that were delicious, plentiful and reasonably priced. We stopped there for a while to figure out what we’d do next. There were dance workshops or more relaxing musical meditation. Perhaps we could take in one or more of the short talks on integral transformative practice, the essence of tantra, healing emotions or many other subjects. Or we could take part in a singing circle or listen to gong therapy underneath the orange groves. So we decided to have a drink and enjoy the music. What caught our attention was the sound of an instrument we’d never heard before. It turned out to be a “Chapman Stick” which combines something of a guitar and bass through its 10 strings and is played entirely by tapping. Played by Andy Prince, it is quite a magical sound.

Next we saw a sight which really summed up the Ibiza Spirit Festival. At one end of the long narrow outdoor swimming pool a therapist was demonstrating watsu, a form of shiatsu practiced in water. At the far end of the pool a yoga class was silhouetted under the roof of a pagoda. There really was something going on in every corner of Atzaró. But despite how busy it was, it never felt chaotic, a feat which is somewhat unusual in Ibiza. Jerry and Sabina Brownstein along with the other organisers deserve real praise for that. Hopefully, the success of this year’s event means it’ll happen again next year. If so, we’ll be back, but a little earlier next time so we don’t miss out on a little bit of personal pampering. 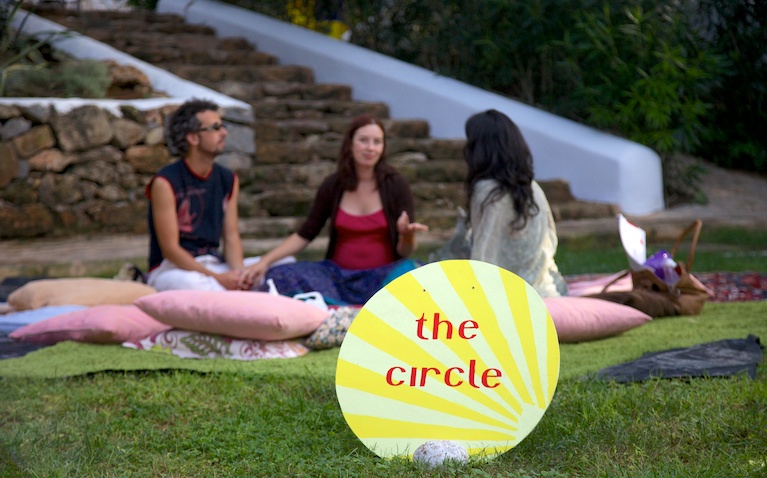