Imagine you’re searching for somebody to create perfect posters for a globally-successful weekly party, an event inspired by the sound, energy and vision of the sixties. Do you look for a commercial graphic designer, steeped in the music and culture of the first summer of love? That sounds the obvious choice. But, not if you’re Piti Urgell, co-founder of Pacha and the continuous driving force behind Flower Power, Ibiza’s longest running party, with roots in 1973 and still growing. Piti decided the person to design the iconic event’s weekly posters was Jesús de Miguel, a man with a track record in painting, video and sculpture. 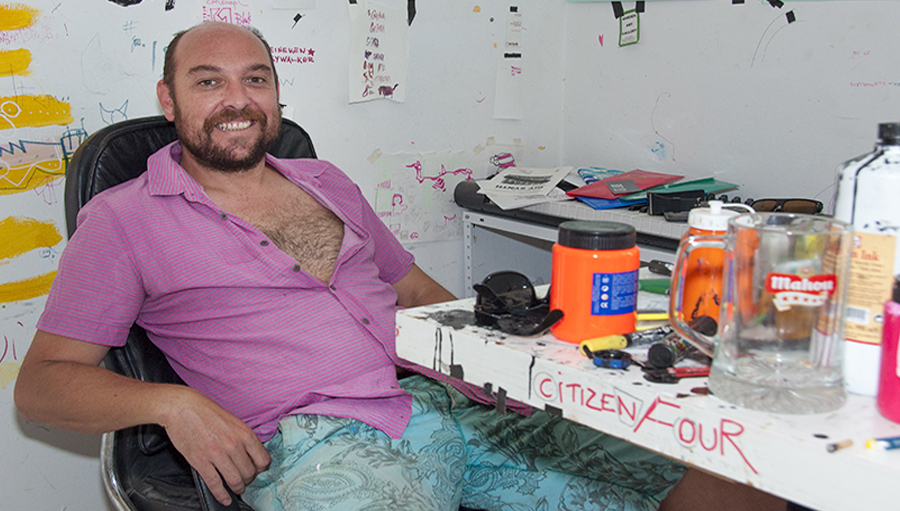 “I don’t know anything about the sixties and I’m not a graphic designer,” says Jesús, laughing at the memory of Piti’s approach. “When I was studying my graphic design teacher told me: ‘I’m going to give you a good mark, but you must never come back and you must never do graphic design.’ So what am I doing now? Graphic design,” Who knows what his old teacher would say, but anybody else looking at the Flower Power posters by Jesús would know that Piti was far from crazy in his choice of artist. Scratch the surface of Flower Power’s success and you can see how, by being out of place, Jesús is the perfect fit. That’s because Piti’s party is not just a recreation of a joyful time almost half a century ago. The hordes of smiling happy people lining up outside Pacha every Tuesday are there to celebrate not just the music and art of the 1960s and 1970s, but its spirit. And the spirit of that age was all about experimentation, pushing boundaries and creating a new future. So how could a party that just looks back, capture the spirit of looking forward? The answer, of course, is that Flower Power doesn’t just live in the past. That would be boring. Instead, it’s a dizzying, multi-coloured, supersonic, psychedelic, all-encompassing collision between the past, the present and the future. And that’s where Jesús fits in. 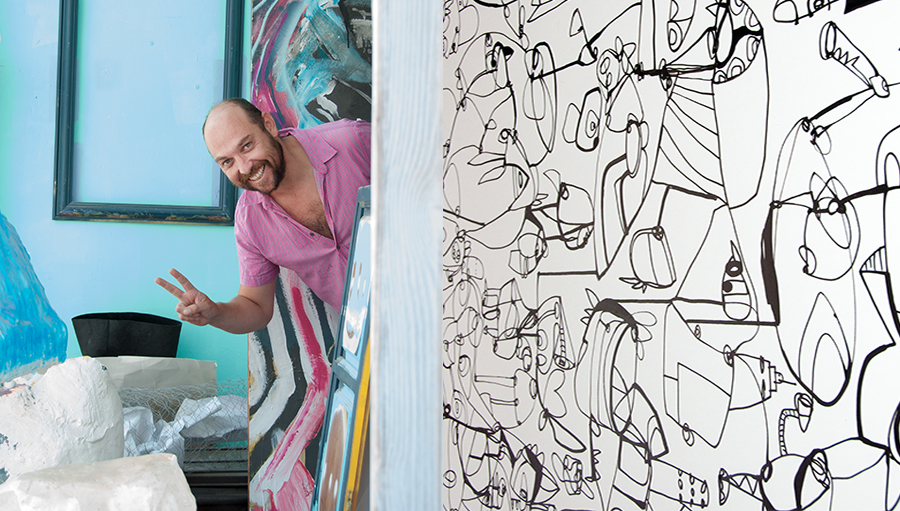 We meet the ever-smiling artist outside La Cava in the centre of Ibiza Town. From there he takes us to his studio just a couple of minutes walk away. A high-ceilinged old apartment you can tell immediately it is not the workplace of a graphic designer. If creativity comes out of chaos, this is the home of an extremely fertile mind. Everywhere there is paper, pots of paint, unfinished sculptures, half-completed canvases, a computer screen rises from the artistic depths and somewhere there is furniture. We know that because he manages to unbury sufficient seats for us and his assistant Sandra. Even for a past master of untidiness like myself it’s hard to work out how anything finished could emerge from this. But, somehow it does, every week. 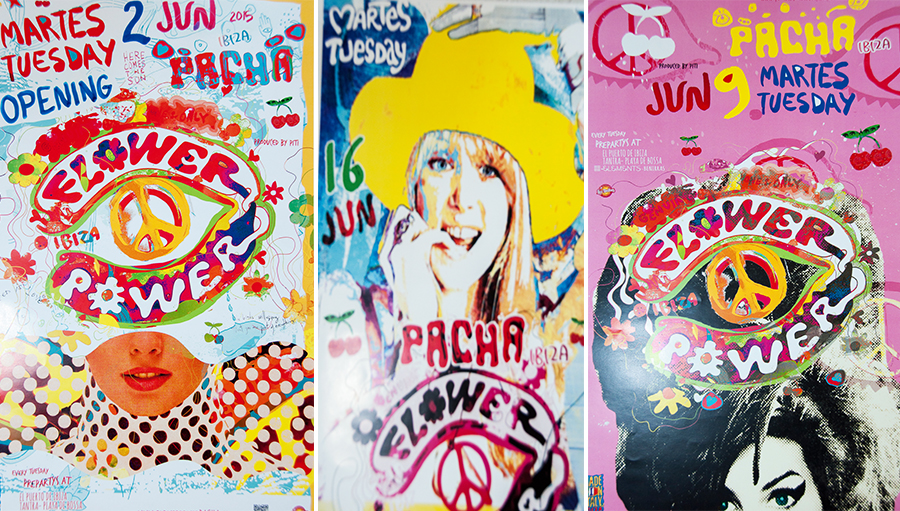 And actually it all begins to make a strange sort of sense as he talks us through the creative process. On the other side of a large creased piece of paper on the floor is glued a monochrome photocopied picture of a classic sixties icon, Jane Fonda as Barbarella. Her image is framed in broad bright magenta brushstrokes. That’s all. As with so much art it seems deceptively simple. But with a little manipulation on the computer, adding a few Flower Power elements, it becomes a striking poster. It seems almost a waste that most copies will last just a few days on an Ibiza wall before being consigned to a bin somewhere. They deserve a longer life. But, the point is that what Jesús is doing absolutely fits the Flower Power ethos. He is reinventing memories of the sixties and seventies using techniques and technologies which weren’t even dreamed of then. 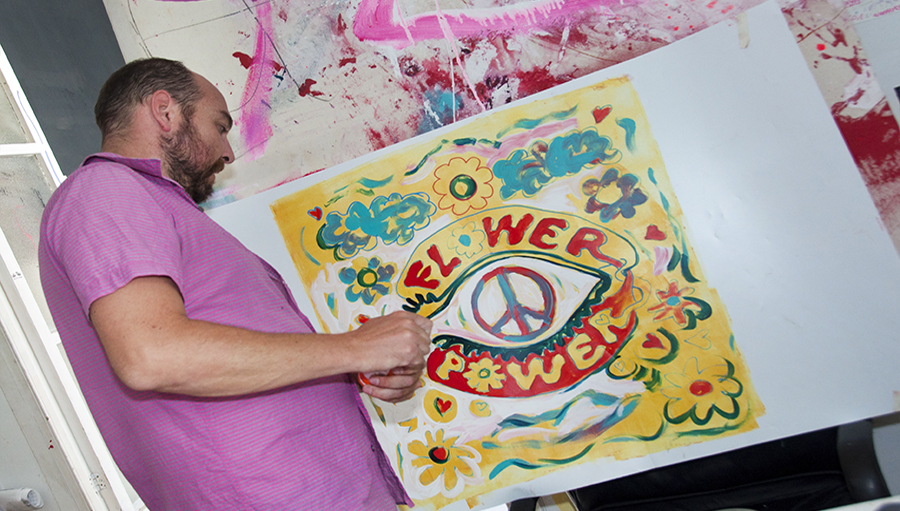 “This is a homage to Easy Rider,” he says as he pulls up a poster on his computer screen based around the iconic image of Peter Fonda, Dennis Hopper and Jack Nicholson astride their chopped Harley Davidsons. “It’s about the vibe of that time,” he says. “It’s just so nice to work with the idea of happiness and love. Perhaps it’s time for some of those things to come back.” You can see the work of Jesús de Miguel as Flower Power’s poster artist everywhere in Ibiza, his mural on the wall of Ibiza Sonica’s studios in San Rafel and exhibitions of his paintings at Think Creative Hub in Carrer de Sant Cristòfol, 11, Ibiza Town from July 3, at Casa Colonial on the Ibiza Town road near Santa Eulalia from July 16 and at the Diario de Ibiza at the end of September. 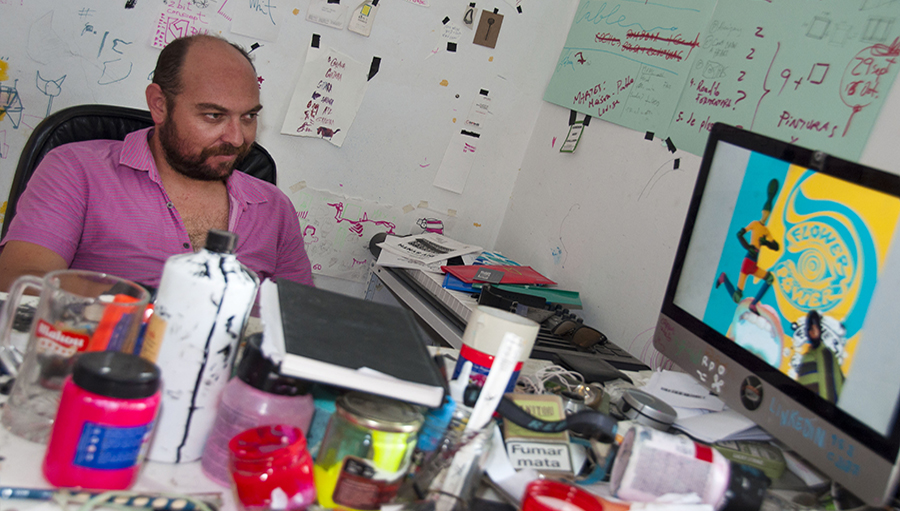 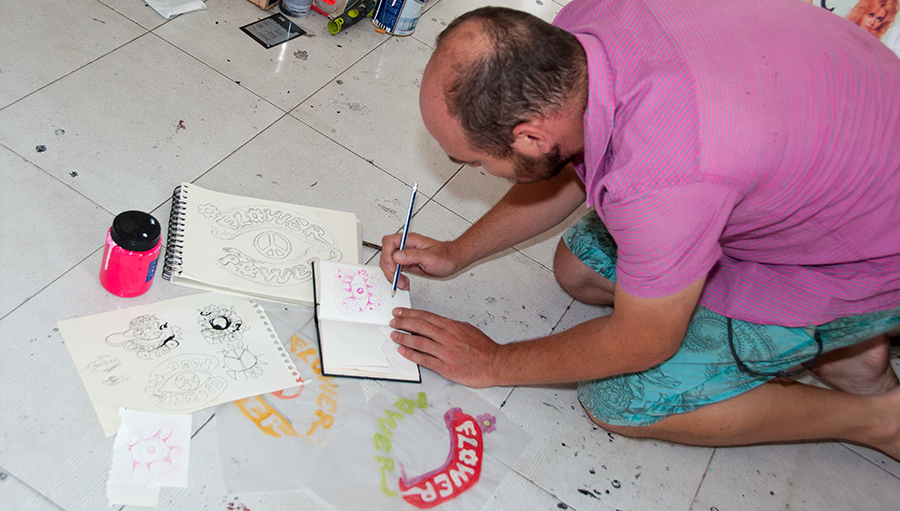 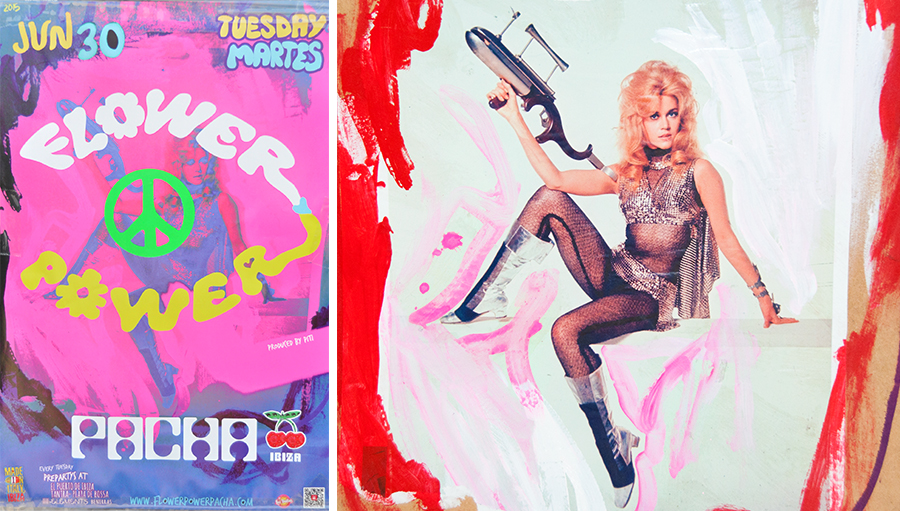