Dan Ghenacia, Shonky and Dyed Soundorom are all well known and popular members of the underground scene in their own right, clocking up numerous floor fillers and remixes between them and rocking dancefloors wherever they travelled. On deciding to form Apollonia, they took three talents and merged it into one, providing a unique experience, not to mention musical journey for their loyal fans. They have been grabbing headlines wherever they play and more recently have mixed the latest ion the fabric compilation series Fabric 70. With a special Circo Loco debut on June 17, the day the album is released and a DC10 Saturday night takeover on August 24 to look forward to this summer, we caught up with the combo… 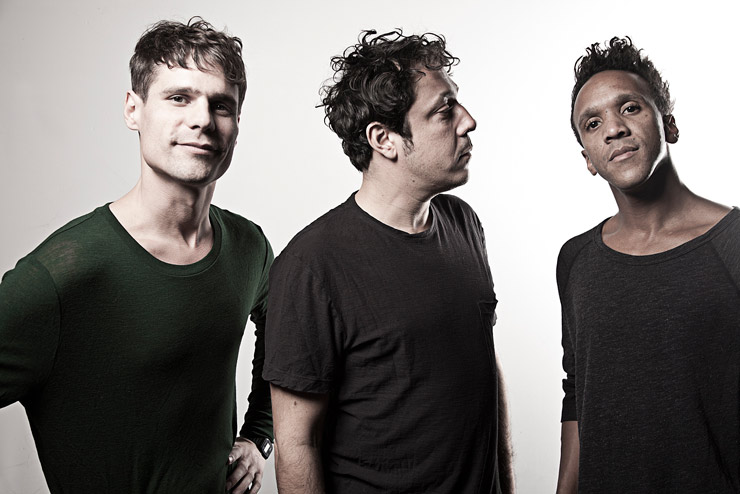 What can we expect from Fabric 70?

We wanted the mix to be a mirror of our DJ sets, what we try to do when we play together is not only a back2back but we really want to sound like one artist. There’s a mixture of new sounds from artists like The Mole, El Prevost, Eduardo de la Calle, and old school like Mood II Swing and Nail.

How did the dynamic work putting the mix together?

The three of us have chosen a selection of tracks that we proposed to each other and the final decision was made if we all agreed on the track. At the same time we were in the studio producing some Apollonia tracks, two of which have been included in the mix, and will be released as the first Apollonia ‘team’ EP on the label.

Was it difficult to agree on and then secure the tracks that you needed for the compilation?

The great thing when u do a compilation for an institution like Fabric is that you are unlikely to get a ‘deny’ on a track. This gives you a lot of freedom to make the most creative and artistic mix. However in the first selection we chose a few tracks had uncleared samples and from this point it was impossible to use them.

What is the most satisfying thing about playing out as a three piece with Apollonia?

There are a lot of good points about being together but we can really feel them during the worldwide tour. Traveling together creates an energy that is harder to achieve when you’re alone.

Apollonia makes its debut at Circo Loco this summer, the date the album is released, what should we expect from the show?

Yes it’s the debut of Apollonia at a Circoloco Monday, but we had of course our Apollonia showcase at DC10 last summer, to be repeated this summer on August 24 when we play all night long. Our set will be like always, we don’t prepare but we bring our record bags loaded and go with the flow of the party… and yes it’s the same day as release of fabric 70 mixed by Apollonia – can’t wait!

You are all Circo Loco regulars, how much are you looking forward to playing in front of that crowd as Apollonia?

Actually we are looking forward to all our gigs at Circoloco, they are sure to be some of the best gigs of the summer!

What is it about the Circo Loco crowd that makes them one of the best to play in front of?

It’s very simple, everybody is on holiday and on top form, they know the music and they have been waiting for the Monday… that’s why it’s one of the best crowds in the world.

How do the three of you interact behind the decks is it a normal back to back scenario?

What we try to do when we play b2b2b is to have the flow of just one artist; there should be complete synergy. We also take more risks when we’re together trying out more obscure tracks, and of course as always we like to mix up the old school with the new sounds.

What are you most looking forward to from Ibiza 2013?

All the Apollonia crew will be living together in a villa in Ibiza for the summer season. It’s one of the best moments for us to be really deep into the music at the clubs but also together at home. Promises to be fantastic again…