One of the most important factors in a party is the sound, not just what is playing but how it can be heard. Sound systems don’t court the limelight, preferring instead to let the music do their talking. If you have a bad one, it’s the first thing that everyone notices. Incubus is the latest system to throw its hat in the ring, claiming to be the finest and most powerful in the world. Rumour has it that soon to be opened Ocean Beach Club in San Antonio has taken the plunge and opted for Incubus, as the hype continues to grow, Essentialibiza sent Michelle Robertson and Nic Jauncey to check out the new phenomenon, in the presence of the brains behind the new concept… 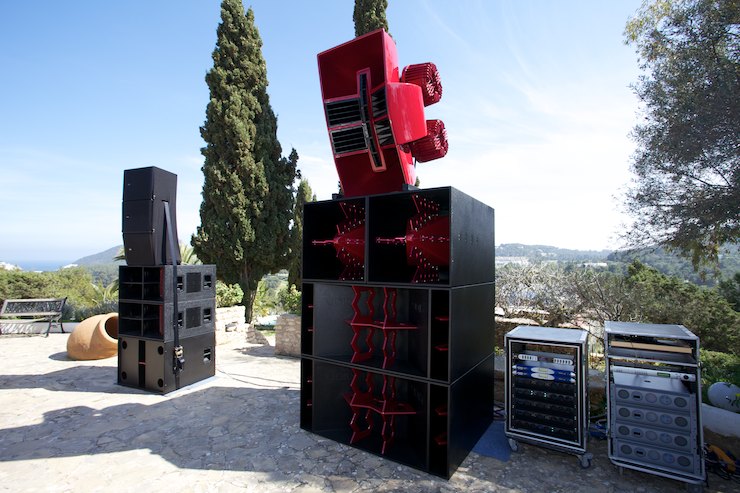 Even with the perfect set in the best club in the world, try and send a roomful of clubbers into electronic heaven on the power of an old boom box and a crackly speaker, and they’ll be off faster than you can say ‘tape deck’. We already know that music is the defining factor in whether you staple yourself to the dance floor or not, but we also know that the sound is essential and hence, it has to be good! So, it’s a relief to know that in the electronic music capital of the world, the biggest – and apparently the best – speaker on the planet is already on the island. Driving up to the distributor’s home near Roca Lisa for an exclusive preview, we’re surprised we can’t hear anything. Ten minutes later we meet the extra-large Incubus, the volume gets turned up to 149 decibels, and we’re left with our jaws on the floor and eyeballs-a-shaking. If that doesn’t give you a picture of how loud we’re talking, compare it to the fact that the roar of a jet engine is only 130 decibels.

Surprisingly though – our ears are fine. Eric Robertson, the man behind Ibiza PA and the distributor for Incubus systems in Spain, explains that the benchmark of a great sound system however huge or loud, is that you should be able to hear someone else speak even when it’s at full power, the bass is pumping, and you’re standing directly in front of it. We try it – it’s true! Recently launched at the international Frankfurt Pro-Light and Sound exhibition, the next stop is Ibiza and we’re lucky enough to meet and speak to the genius behind the system, Rog Mogale, who lives in Tibet but is in Ibiza just for a few days to help introduce his creation to the music capital of the world. Rog is known in the audio industry as a pioneer of sound. It’s his personal love of music that makes him step out of his tranquil life in Tibet and come up with these world-wide ear turners, and so, when he explains that he likes to break the rules of conformity, we’re not surprised. His monster system took two years to design and create and basically, it does the same job as many speakers put together and is based on the line-in-a-row principal – whereby you have lots of speakers hanging in a line to distribute the sound evenly.

However, he adds that he came up with this idea because he wanted the whole audience to unite. This speaker is specifically designed to make sure that every single person in the same room – be it inside a huge nightclub, a private villa, a luxury hotel suite or an aircraft hangar – has exactly the same experience and so with this sound system, it does just that. Everyone can hear the music at the same level and the shape of the speaker dictates this as well – the curves are not there purely to make it look nice. Finishing the preview by edging even closer to this pulsating red giant, we’re still amazed by how something so loud doesn’t affect the conversation we’re having just metres away, but as we drive off, we’re just extremely happy that we can still hear the birds singing. Maybe even a little bit better than before.