September has been quite a month for debuts at Ibiza Rocks, Bloc Party was a hard one to believe but nothing compared to the band we are off to see tonight. New Order, one of the most influential bands of our time, a band linked with dance music from it’s birth in the UK and a band that has influenced more electronic producers and DJs than anyone in their time, has never played in Ibiza? It almost sounds crazy when you say it out loud. That will be put right tonight when the new look New Order takes to the famous stage in heart of Ibiza Rocks hotel. Tonight’s crowd is slightly different than normal, this is a band that successfully straddles generations, from those that grew up listening to them evolve from the gritty Joy Division to the polished global chart toppers they would become to the current generation, whose acute knowledge of things that have gone before leads them to embrace the band as their own. 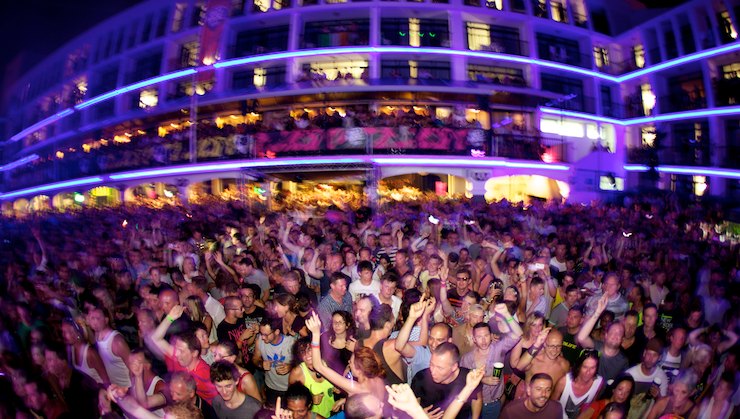 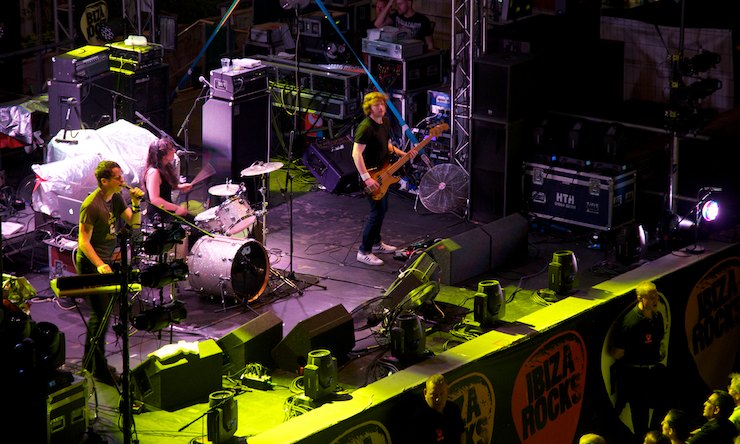 The hotel is packed, from the balconies overlooking the stage, to the VIP balcony, which is ten deep and the area directly in front of the famous stage, which has filled unusually early, fittingly as The Whip is making its fourth Rocks appearance and treats the monster crowd to a performance of high energy, guitar fuelled songs that sets the scene perfectly for the main event. New Order has tempted many faces out of retirement for the night, as well as representatives from all of the islands major clubs, such is the importance of the part this band from Salford has played in the evolution of electronic music. The air of anticipation from the large crowd grows as we get nearer game time, Doorly has returned to the DJ booth and is providing a musical countdown dropping ‘80s electronic classics from the likes of Depeche Mode and Human League, prompting the crowd into its first karaoke session of the evening. 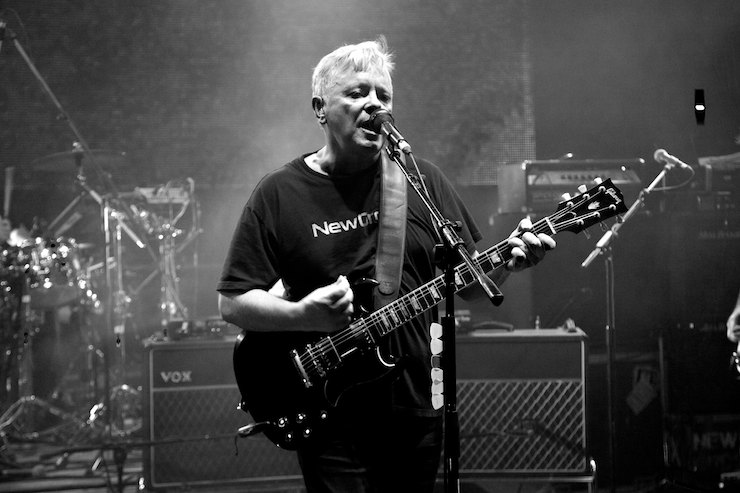 The lights drop and a haunting keyboard loop is joined by a burst from the huge ice machines as the New Order members take to the stage, minus Bass player Peter Hook, who is not part of the new set up. The crowd erupts as Bernard Sumner says hello, introduces the band and mentions their home city before they launch into over an hours worth of electronic genius. Sumner has always been the reluctant front man, forced into the part rather than grabbing it, and it’s fair to say he doesn’t have the most commanding of stage presences, talking to Andy Wilson on the press balcony overlooking the venue, he sums New Order up perfectly, “they’re the sum of all the parts”. The only thing I would question about the performance is the running order of the set list, with the amount of sing-a-long tunes that the band has, it could have rocked the hotel to its core from start to finish, instead they chose to ease themselves into their first Ibiza live adventure and while the crowd was still enthusiastic, it’s not really until they deliver True Faith that it truly comes to life. 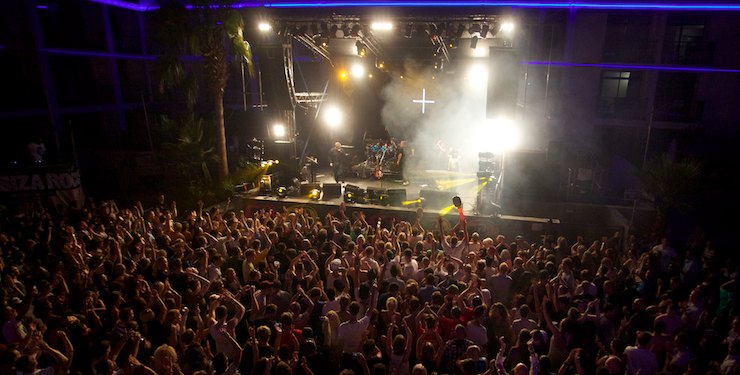 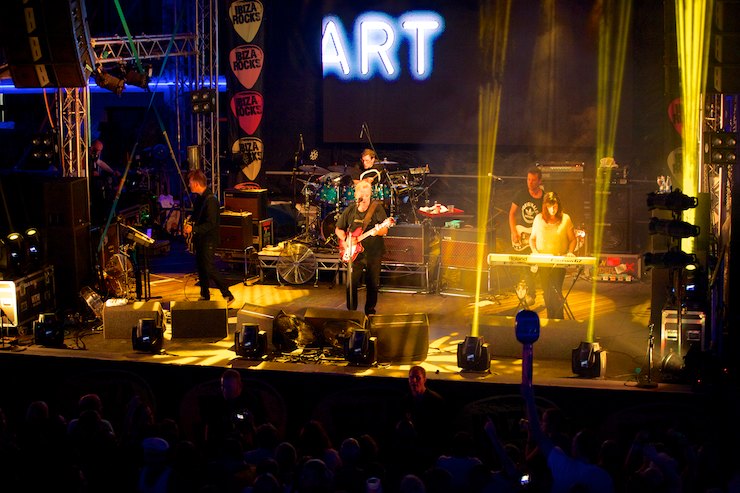 What follows is half an hour of unadulterated audience participation as New Order runs through some of its biggest hits, including Bizarre Love Triangle and Regret, it wouldn’t surprise me if they struggled to hear themselves over the volume of the singing coming from the crowd. The biggest roar of the night is saved for the last tune of the set as the distinctive drum pattern of Blue Monday kicks in and the decibel level reaches world record-breaking levels. The long intro lets Bernard sneak off stage while the crowd starts it’s sing-a-long early. He returns just in time to ask the massive crowd “How does it feel, to treat me like you do? Queue yet another eruption! The tune comes to a close with Bernard joining Gillian Gilbert on the keyboards at the front of the stage before leaving to a rapturous applause, which carries on for several minutes before they return for an encore. First up is a thundering version of Temptation as Bernard tries to guess the colour of every eye in the place, at which point many of them are no longer dry! This has been an appearance long overdue and one that brought memories flooding back for so many of the crowd as well as delivering another one of those Ibiza moments that will live long after the dust has settled. 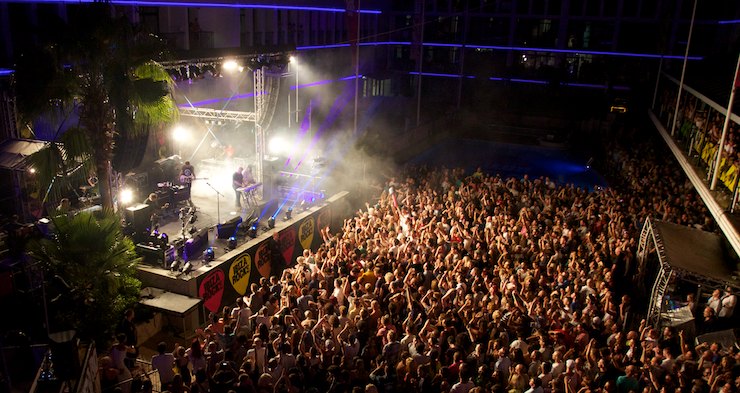 The final tune couldn’t really be anything else and while he will be the first to acknowledge that he is not Ian Curtis, Bernard delivers an emotive vocal to Joy Division’s ‘Love Will Tear Us Apart’, ably helped by all and sundry facing the stage! The curtain finally comes down on an appearance that was long overdue, since they recorded their album on the island 30 years ago in fact. New Order can rightly claim to have played more than a passing part in the youth movement that evolved into the club scene, which in turn crowned Ibiza as its capital, things have finally come full circle!